I set off from Christchurch on the May 8th, 2017 to embark on a trip that would open my mind and change my views of how I perceived global agriculture and how we feed the world.

I selected the India Global Focus Programme (GFP) as I’d travelled there 10 years earlier. It was a place I didn’t particularly enjoy at the time but a place that has always stuck in my mind. I wanted to know more about what made this chaotic place function. The India GFP also included Qatar.

There were ten Nuffielders in our group which included scholars from Australia, UK, Ireland, Holland, Brazil and New Zealand. The group travelled through Singapore, India, Qatar, Denmark, UK and America.

Having done the post Contemporary Scholars Conference (CSC) tour, I was looking forward to the dynamics of group travel and the added value the diversity of the group would bring. The diversity of the group was great during our daily debrief, it was something we all looked forward to as it was an opportunity to harvest others thoughts and ideas and help develop our own thinking.

We started our GFP in Singapore. It was great to catch up with friends I had met at the CSC but wouldn’t be travelling with. The foundation was set with some very good meetings in Singapore which showed the role that Singapore plays in global trade and how it is a hub for multi-national companies to be based from. It left me feeling that Singapore is the puppeteer of global trading logistics, especially for China. 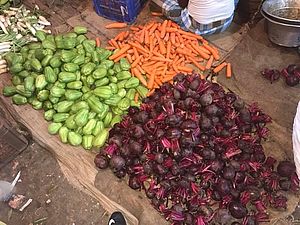 The colours, smells and sounds of India hit you as soon as you arrive. Our time there, took us from the south to the north visiting vegetable growers, dairy farms, coffee plantations, vegetable processing plants and universities. Going forward India faces some huge issues with water supply. Water table levels in the north are reducing by three feet a year in some places and the south has seen once large rivers not flowing for the last three years. With a growing population expected to surpass China, I think they are being unrealistic about their ability to feed themselves which is a goal of the government. This is a great opportunity for New Zealand with a rising middle class who love to eat. A belly is a sign of prosperity.

Qatar is well named as ‘The Sandpit’. The phrase ‘more money than sense’ came to mind a number of times. In a country where 99% of the food consumed is imported they are at the mercy of world trade. There has been hundreds of millions spent on farms that are inefficient to say the least. There are opportunities here for New Zealanders in consulting. For New Zealand, I think it’s a good entry to the Middle East. There is a very strong Australian presence, the same can’t be said for us.

We were the first group to have Denmark included as part of the GFP. The key things that stick in my mind are orderly, efficient, high standards and high debt in family farms due to succession laws. The Danes are very patriotic and consumers will buy Danish products whereever possible, price is not the main driver. The same cannot be said about New Zealand. Do NZ consumers know our story well enough? I don’t think so. 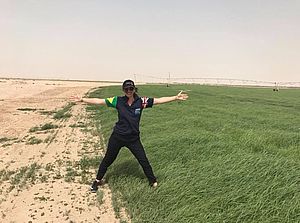 The UK had the 3 GFP groups meeting up again and join the moving Triennial conference. It was great to meet with Nuffield alumni from around the world. The topic of conference day was “Farming Fit for Food”. We need to remember we are producing food. I see an opportunity for New Zealand farmers and industry to link the environmental message in with the health benefits of the food we produce. Emotion will win over fact every time. The question needs to be asked ‘How much are we prepared to pay for a healthy family?’

It was great to get behind the scenes in Washington DC and try to understand the complexity of American politics. It became very clear that agriculture is not a priority for the current administration. I was surprised to hear that 80% of the Farm Bill budget is spent on food stamps and nutrition, leaving 20% for farm related spending. Our time in Iowa was a highlight. The birthplace of global brands such DuPont Pioneer, John Deere and Noble Peace Prize winner Norman E Borlaug.

The farmers there just seemed to be getting on with what they do best which is farming and they do it well. It was refreshing to see a side of America that was humble and took pride in what they do. Bill Northey, Iowa Secretary of Agriculture, needs a special mention. He popped up everywhere we went, he was so proud to be showing off his state and he knew about farming and farmers. He was appreciative of our group spending time in his home state. This was all during a time he was meeting with Secretary Perdue and President Trump to be part of the administration. We were hopeful of getting to meet the President but it wasn’t to be!

As always, I was proud to be travelling as a Kiwi. We are well respected but we are better known for our scenery then our great quality produce. A number of presentations we had didn’t even include New Zealand on the world map. We need to be shouting from the roof tops what we have because grass fed, GMO and antibiotic free food is on an upward trend. We need to spell out what we do in a simple message that plays on the emotions. If we don’t fill this space, someone else will.