The China Global Focus Programme (GFP) group was one of the more diverse groups this year, with our group comprising of representatives from Australia, Ireland, Wales, Netherlands, England, South Africa, and myself from New Zealand. The GFP tour was a once in a lifetime experience made better by the diversity of our group, which created great internal discussion and debate following all our visits each day. I would like to thank Nuffield New Zealand (NZ) once again for this opportunity.

Our group was lucky enough to travel to seven different countries on our journey, which included: Singapore, Philippines, Hong Kong, China, Germany, United Kingdom (UK), and the United States of America (USA).

During our travels each country brought different themes to mind which I have highlighted in the title of each country overview. The overall theme I observed for NZ was that the rest of the world thought very highly of NZ as a beautiful country and a great food producer. However, this has led us to becoming complacent in many markets.

A key improvement for NZ in the international market could be to remain active in our export markets and continue to sell ourselves and our products. Just because we are selling a product in a market now doesn’t mean someone else won’t be tomorrow.

Visiting a large supermarket in Singapore, it was great to see so much NZ product in the stores, however, this was met with disappointment that our products were some of the lowest priced items in the supermarket.

Our friends from Australia, Switzerland and the USA, were consistently gaining a premium across most primary products including red meat and milk. The biggest difference following a quick survey of some consumers in the store was the branding difference between NZ and our competitors.

NZ products were branded functionally with minimal fuss over labelling and a small ‘NZ made’ triangle on the packet. This was in contrast to other international products that used pictures and stories to advertise and brand their products. This played on the consumer’s emotions and they were more likely to pay for a dairy product with a picture of a happy family in front of a cow and a link to a farmer’s story.

New Zealanders are historically humble when it comes to ‘talking ourselves up’, however, in order to obtain premium we need to be ‘louder’ or more strategic in our branding to be noticed by the consumer.

The Philippines was a great example of where western culture particularly the USA was having an influence on the traditional eastern diets of the Filipinos. A large number of branded western products were sold in smaller packets to be affordable and the locals preferred these products as they showcased wealth.

The highlight of the trip was being hosted by the International Rice Research Institute, where we got to experience first-hand the different techniques employed by farmers to grow rice. We also had an update on GMO rice varieties and the scientific evidence that these new varieties could feed 13-14 billion people (if approved) with no impact on food safety.

Some of the debate centred around who was responsible to feed the world and it was agreed that New Zealand’s strength to this battle was our knowledge and farming skills that we could share rather than our produce, given our size and land limitations. 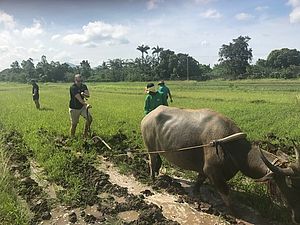 Hong Kong was a very interesting city with a large number of global businesses who do business in China basing their headquarters in the city.

Traditionally Hong Kong has been a port hub for China, but recently due to the creation of greater shipping lanes in and around China, this is now changing. Rather than dwell on this Hong Kong is embracing change and focussing on the service industries such as finance.

While in Hong Kong we were lucky enough to be hosted by the Hong Kong Jockey Club and witnessed first-hand how a business had combatted the threat of online sales and changed the purchasing experience to increase ticket sales and income.

China was a real eye opener for me personally given the population base, it really did take some getting used to.

Three key themes that came out of our visit was the importance of ‘country of origin’ in China, how complacent NZ was in the market, and reasons why the Chinese were buying up land around the globe.

Everywhere we went it became very clear that the Chinese people did not trust Chinese food, and preferred imported product. NZ had managed with our free trade deal to get into china early, however, from what I witnessed in two examples we have rested on our laurels a fair bit.

First example was at the at the SIAL expo in Shanghai (which is China’s largest food expo) where I saw only two NZ companies in attendance in the Honey and Seafood sectors, and no show from the beef or dairy sectors.

This was in contrast to all other export focussed countries that had large stands at the show promoting both their countries and their products. The second example was in the local supermarkets where NZ infant formula was the lowest priced out of all imported formula.

The third major learning was around Chinese investment offshore in places like New Zealand. The acquisitions of land were all about guaranteeing future food for their growing population. Interestingly, the comment most Chinese businessmen made was that they would actually prefer to lease farmland in our countries on long term agreements of 20-30 years than take the risk of purchasing the property.

The highlight of Germany was the people and the landscape, which was not dissimilar to NZ. We were lucky enough to be hosted by Stefan and Liz Teepker, mixed farmers from Western Germany, who went above and beyond to organise some great farm visits, and to ensure we enjoyed our time in Germany.

The key theme from the German farms was renewable energy; with most of the farms we visited having some form of wind, sun or bio generated power as the main income source for the property.

While the building of the turbines or bio digesters was largely government supported, the on-going cash flow from these power generators had allowed these farmers to invest in their original businesses.

Many of these original farm production systems were now just hobbies and this had meant many had lost efficiencies in cost of production compared to the likes of New Zealand.

In the UK, we were lucky enough to attend the Nuffield Triennial Conference, where we got to mix and mingle with many previous Nuffield scholars from around the world.

This was a valuable opportunity to make some contacts for further travel and research later in the year. The common topic of the conference was around ‘Brexit’ and what the future looked like for British Agriculture as they transitioned out of the European Union (EU).

The debate naturally centred around farm subsidies currently received by farmers and whether these would continue and for what. Interesting for me was the large amount of Farmers, including UK Nuffielders, whose attitude was that they would not survive without subsidies and were very resistant to change.

Delegates at the conference were in agreement that due to Agricultures relatively small contribution to GDP that subsidies were going to be greatly reduced if not removed.

This potentially would create opportunities for the younger generation if older farmers chose to exit the industry. It was clear that the process of leaving the EU was going to be very long and drawn out. Due to this and the inward focus it brings, they may miss global market access opportunities.

In the US we were fortunate to visit two areas; Washington DC and California. Washington was a great opportunity to meet a number of government officials including a Senator, as well as learning how the US political worked.

It became very clear early on that President Trump was not prioritising Agriculture at all with the Senator for Agriculture the last one to be selected in his team.

This was further reinforced once we arrived in California, where the majority of the rural labour force is migrant labour, mainly from Mexico, which was something Mr Trump very publically wanted to clamp down on.

In California the farmers were coming off a five year drought and water was the main topic of conversation. With ground water levels dropping 2.5 feet per year during the drought, many restrictions were in place and only the rich farmers were likely to be able to afford to farm moving forward.

More storage of surface water was the obvious solution; however, most farmers had their ‘heads in the sand’ over the issue and were content to flood their paddocks with excess water this year in an attempt to re-charge the ground water. When questioned they could not offer any scientific evidence to support this practice.