It is with sadness that we announce the peaceful passing of 1960 Canadian Scholar Frederick Arthur “Fred” Walsh C.M. – age 91, of Berwick, Nova Scotia, Canada.

Fred Walsh was one of the stalwarts that helped keep Nuffield Canada alive during its early days and we are pleased to share his obituary with you all.

Fred grew up in Halifax and as a teenager he spent time working on farms in the Annapolis Valley or on his Grandfather’s dairy farm in Coverdale, New Brunswick.

He attended LeMarchant St. School and Rothesay Collegiate in New Brunswick. He entered NSAC and graduated from MacDonald College of McGill University in 1952 with a BSc. in Agriculture with a major in Horticulture.

Upon graduation Fred moved to the Valley and purchased a farm in Rockland where he grew apples, pears, peaches and plums. He also grew Gladiolis which he shipped all over Atlantic Canada as well as farming hogs, laying hens and beef cattle.

In 1954 he married Mary Mackay and they started their family of six children.

(Blake Vice, 2013 Scholar Chair of Nuffield Canada, spoke to Waldo Walsh, Fred’s son, yesterday. Waldo shared that he was born when his father was away on his Nuffield travels).

Fred had also worked off the farm with the Nova Scotia Department of Agriculture and Marketing, first as a Resource Development Officer from 1972-76 and later as an Agricultural Representative, before retiring in 1994.

After his retirement, Fred spent much time working in his gardens, advising his children on their farming operations and volunteering in the community. Fred had been a member of the Nova Scotia Fruit Growers Association since 1952 and had actively served in many capacities, including Director, Chairman of various committees, and President in 1997.

Fred’s lifetime of volunteering culminated when he was recognized nationally with the Order of Canada in 2007.

Fred received many awards including:

Fred devoted much time to many organizations, often in a major role, some of which are:

Fred’s ornamental gardens were his passion. He believed in planting shrubs, trees and flowers to celebrate marriages, births, and to honour peoples’ lives. He gave trees he had collected and nurtured from seedling to friends and families to celebrate their special events.

His gardens were the backdrop for numerous photographs of family and community events, marriages and reunions for over 50 years. His tireless work became the “Garden of Memories”, inscribed on a bronze plaque mounted on a large granite rock, dedicated to his family. Ending with the phrase “A Gardener by The Grace of God”, Fred was a man of great faith.

He attended the Berwick United Church where he was a member for over 60 years and held various positions. He was often asked to give the sermon, a request he thoroughly enjoyed because of his ability to effectively communicate his positive outlook on life.

In his role as an Agricultural Representative, Fred dealt with farmers on a daily basis and understood the realities of farming. He was able to inform them of new policies or grants and counsel those experiencing challenges in their farm operations.

Later in life Fred visited local nursing homes because he knew that the residents appreciated the company. It was also common for him to deliver freshly cut flowers from his garden to family, friends, and visitors – just to brighten their day!

He was active in the Elder-Hostel program at Acadia University acting as a tour guide. It was not uncommon for a large bus to appear unannounced in the driveway of the family farm.

Fred was very proud that two of his sons and a grandson continue in the tree fruit industry.

He is survived by his wife, Mary, six children and extended family members.

Mark your calendar and get your tickets for E Tipu 2021: The Boma NZ Agri Summit on 11–12 May at Christchurch Town Hall.

This is the must-attend event of the year: two days of international and national speakers, interactive workshops, valuable cross-sector networking, and more.

Learn about new trends, innovative tech, and exponential changes coming at us. Most importantly, you’ll learn how we can adapt our food and fibre sectors to be more innovative, sustainable, collaborative, and profitable now and in the future.

Get full details and secure your place now at etipu.boma.global.

NZ Rural Leaders and Whanganui & Partners entered into a multi-year agreement last year to offer scholarships to Whanganui residents who directly contribute to the regions agribusiness sector. To be eligible for a Scholarship, candidates must undertake either a Kellogg Rural Leadership Programme or Nuffield Farming Scholarship.

David Eade, 2021 Nuffield NZ Scholar was selected as the first recipient of a Scholarship.

Read more about our partnership with Whanganui & Partners, and about David Eade in this article on page 10 in the Farmers Weekly virtual newspaper:
https://farmersweekly.co.nz/topic/virtual-publication/view/farmers-weekly-nz-15-02-2021

The NZAGRC is seeking expressions of interest for two new governance positions – an independent Chair and Member for the newly established NZAGRC Governance Group.

Rural Leaders are delighted to announce our new partnership with Whanganui and Partners to help grow regional leaders and entrepreneurial capital in Whanganui’s food and fibre sector.

As part of the sponsorship, two scholarships will be granted to Whanganui residents, or those scholars who directly contribute to Whanganui’s agribusiness sector, who are undertaking a Kellogg Rural Leadership Programme or a Nuffield Farming Scholarship.

Find out more about the new partnership here.

Step up in 2021 – be part of the Kellogg Rural Leadership programme in Tai Tokerau! 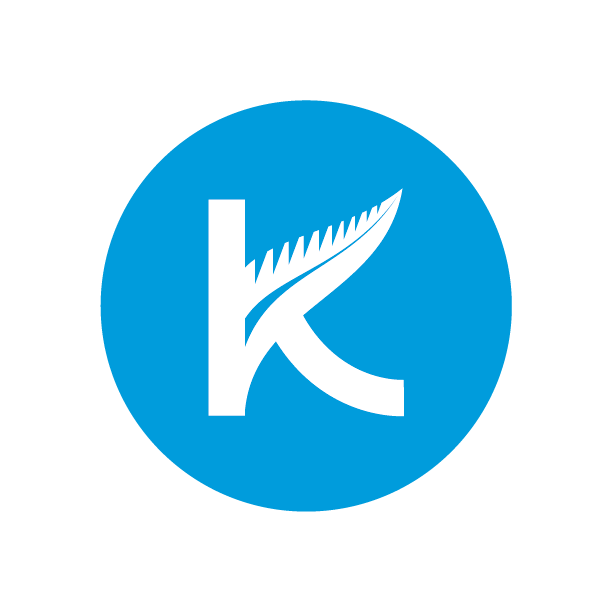 Take the next step in your development and do the Kellogg Rural Leadership Programme in Tai Tokerau in 2021.

Chris Parsons, CEO of Rural Leaders and Lindy Nelson, Founder of Agri-Women’s Development Trust joined Sarah Perriam on Sarah’s Country to talk about the year ahead and what to expect for 2021.

Listen to the podcast here:

Step up in 2021 – be part of the Kellogg Rural Leadership programme in Tai Tokerau!

Take the next step in your development and do the Kellogg Rural Leadership Programme in Tai Tokerau in 2021.

In this interview on Sarah’s Country Chris Parsons, CEO of Rural Leaders introduces the 2021 Nuffield scholars and talks about how they will navigate their global research with covid-related travel restrictions.

Chris also touches on the 2020 Nuffield Scholar insights that were presented at the 2021 Nuffield Awards Ceremony, following the work the 2020 Scholars have been doing on the sector impacts of COVID-19.

Listen to the podcast here: 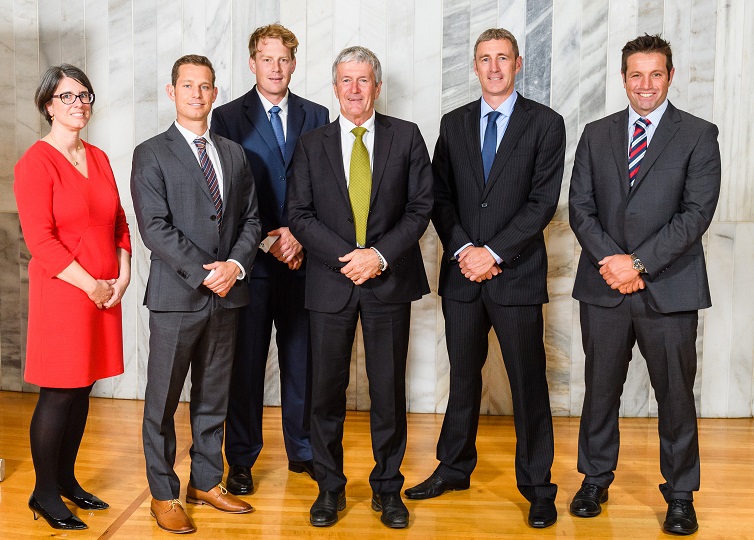 The latest cohort of emerging leaders in New Zealand’s primary sector were awarded a 2021 Nuffield NZ Farming Scholarship at Parliament on 3rd November. The Scholarships were awarded by Hon Damien O’Connor, Minister of Agriculture, Biosecurity and Food Safety, Minister for Rural Communities and Minister of State for Trade and Export.

The 2021 Nuffield scholars are Ben Anderson, owner and manager of a dry stock farm in Hawkes Bay, David Eade, owner of a finishing block in Whanganui and GM of Apiary Solutions, Daniel Eb, Auckland based Communication Strategist, John Foley, Senior Seed Production Agronomist for PGG Wrightson Seeds in Christchurch and Lynsey Stratford, an equity partner in a 420 cow dairy farm in Curio Bay and Dairy Environment Leader with Dairy NZ.

The travel programme for scholars next year will be different to previous years due to border closures resulting from COVID19.  Typically, the Nuffield Scholarship programme involves travel internationally for at least four months and participation in a Contemporary Scholars Conference with Nuffield Scholars from around the world. Followed by a six-week Global Focus Programme through several countries with other scholars.

“Next year our scholars will start their programme with extensive national travel to gain greater insights and deeper understanding into New Zealand’s primary sector before embarking on any international travel” says Nuffield NZ Chairman, Andrew Watters.

“Although the programme will be delivered differently to previous years, it will offer scholars new opportunities and experiences, along with a global perspective whether or not scholars travel abroad” says Watters.

The five new Scholars will join more than 160 Nuffield alumni who have been awarded Nuffield Scholarships over the past 70 years. Their research topics are likely to cover a range of different agricultural issues such as climate change, fractional investing in agriculture, repositioning the role that farming plays in society, technology in agriculture around automation of roles and health, safety and wellbeing on farm.

We’re so pleased to have you promote the Nuffield Farming Scholarship through your networks either as a sponsor or an industry partner.

We appreciate you are busy so this page has everything you need to promote the programme.

Copy and paste the text from sections below to share on your social media channels and EDMs.

Please send any copy outside of the below that you wish to use to  tamneyhoyle@ruralleaders.co.nz to ensure our message is consistent.

We will be posting more content on our social media profiles throughout the campaign to attract more applicants. Your support with our posts is always appreciated!

If you have any additional avenues that could help promote the programme, we’d love to hear from you!

To request a copy of our brand guidelines please email Tamneyhoyle@ruralleaders.co.nz.

If you feature our logo on your website or have it stored on file. Please make sure it is our most recent version – one of the below:

Draft copy for email use

Are you an emerging leader with ideas you’d like to explore and bring to life?

Do you have a desire to help shape and lead the future of the Primary Industry?

If you are, then we strongly encourage you to apply for a Nuffield NZ Farming Scholarship.

There’s no better time then right now to fast track your development as an emerging leader with our Food and fibre sector positioned as the only sector to lead our national economic recovery. Become an expert in your chosen field of study and lead the conversations on the issues the agri-food sector faces today.

A Nuffield experience will help you develop personally, build new networks and gain new insights to share within the business and wider-agri sector.

There is no better way to expand and broaden your experience, transform your way of thinking than a Nuffield Scholarship.

APPLY NOW! For a 2021 Nuffield NZ Scholarship and become a world class leader for our country.

Are you an emerging leader with a desire to help shape and lead the future of the Primary Industry?


If you are, then we strongly encourage you to apply for a Nuffield NZ Farming Scholarship.

There’s no better time then right now to fast track your development as an emerging leader with our food and fibre sector positioned as the only sector to lead our national economic recovery.

Become an expert in your chosen field of study and lead the conversations on the issues the agri-food sector faces today. 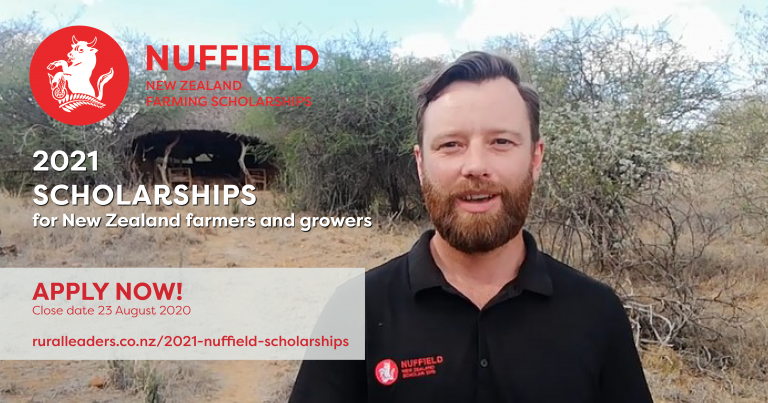 Rebecca's video insights from her travels around the world 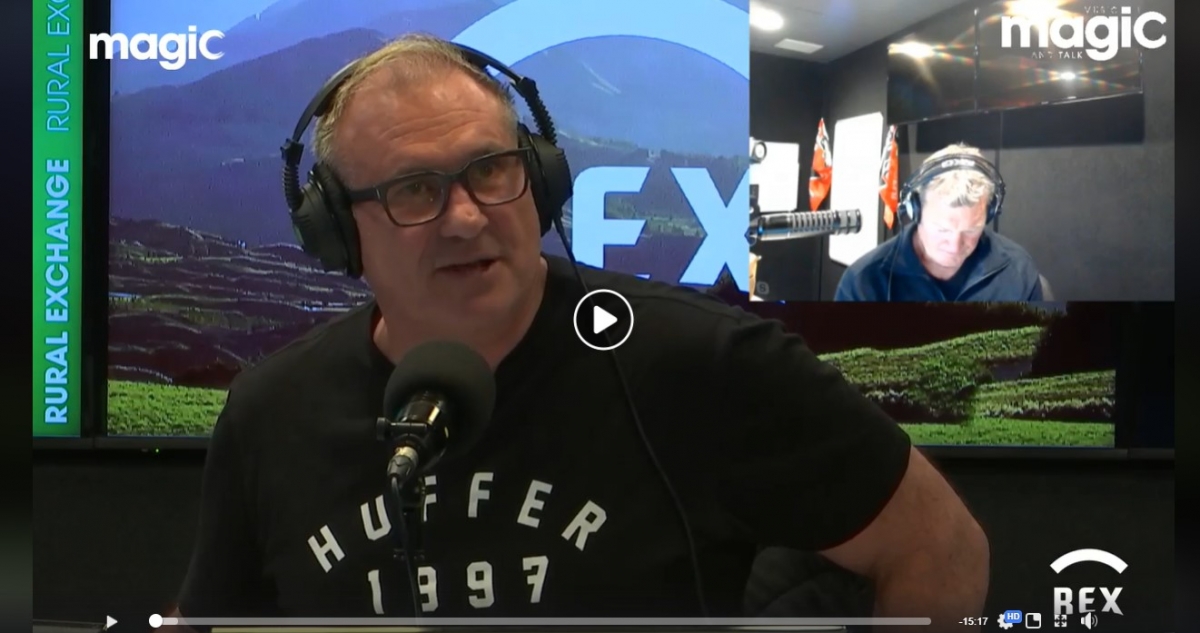