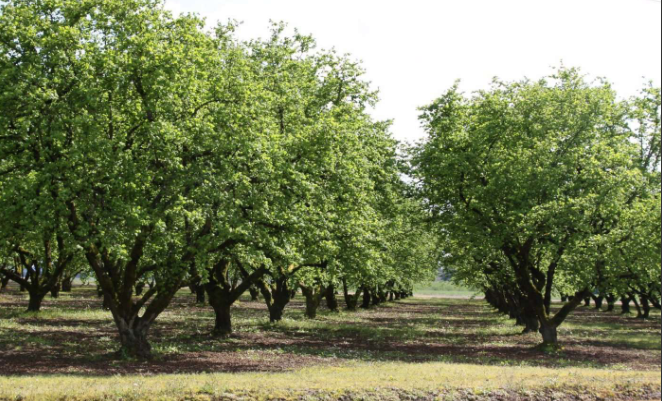 The New Zealand arable farming industry faces a number of issues as it attempts to remain profitable in a world of increasing public scrutiny and environmental regulation.

This report investigates whether the integration of a hazelnut orchard into an existing Canterbury arable farm could provide:

Internationally, gross margin returns from well-managed hazelnut orchards can be in excess of $5,000/ha.

New cultivars that have been bred internationally such as ‘Jefferson’ show significant promise in terms of high yield and nut quality. If international production can be replicated in New Zealand then hazelnuts offer a significantly higher gross margin than most common arable crops. Modelling has shown that income from a hazelnut orchard is highly sensitive to both price and yields, however a gross margin of $4,375/ha can be achieved after 12 years. The NPV and IRR of a hazelnut orchard are calculated to be $10,987/ha and 10% respectively.

There is a widely held view by the public and Central Government that excessive nitrate-N leaching and the subsequent pollution of freshwater are no longer acceptable. Hazelnuts use low quantities of nitrogen fertiliser when compared to most common arable crops. The average Canterbury arable farm leaches approximately 50kgN/ha/yr.

Modelling in Overseer shows a hazelnut orchard may leach approximately 7kgN/ha/yr. This makes hazelnuts an appealing option especially in catchments where nitrate-N leaching is capped or where reductions have been mandated by regional councils.

The He Waka Eke Noa climate agreement which was established in 2019 will introduce a pricing mechanism for agricultural greenhouse gas emissions by 2025. This mechanism will likely allow for emissions to be offset by on-farm carbon sequestration and planting of orchards may be an allowable component of this agreement.

Using ETS pricing as a proxy tool, this report calculated the approximate income (in the form of a cost offset) that a hazelnut orchard could provide to an arable farmer. The result being that the carbon income from a hazelnut orchard would be negligible ($5-$50/ha/yr) and therefore the offsetting of greenhouse gas emissions would not be a reason for planting a hazelnut orchard.

Planting an orchard is a significant commitment, particularly in terms of opportunity cost, as the success of the orchard will not be able to be determined until at least 10 years after establishment. For this reason, farmers need robust data to ensure they are making a well-informed decision.

Therefore, it is recommended that further research is conducted in the following areas: