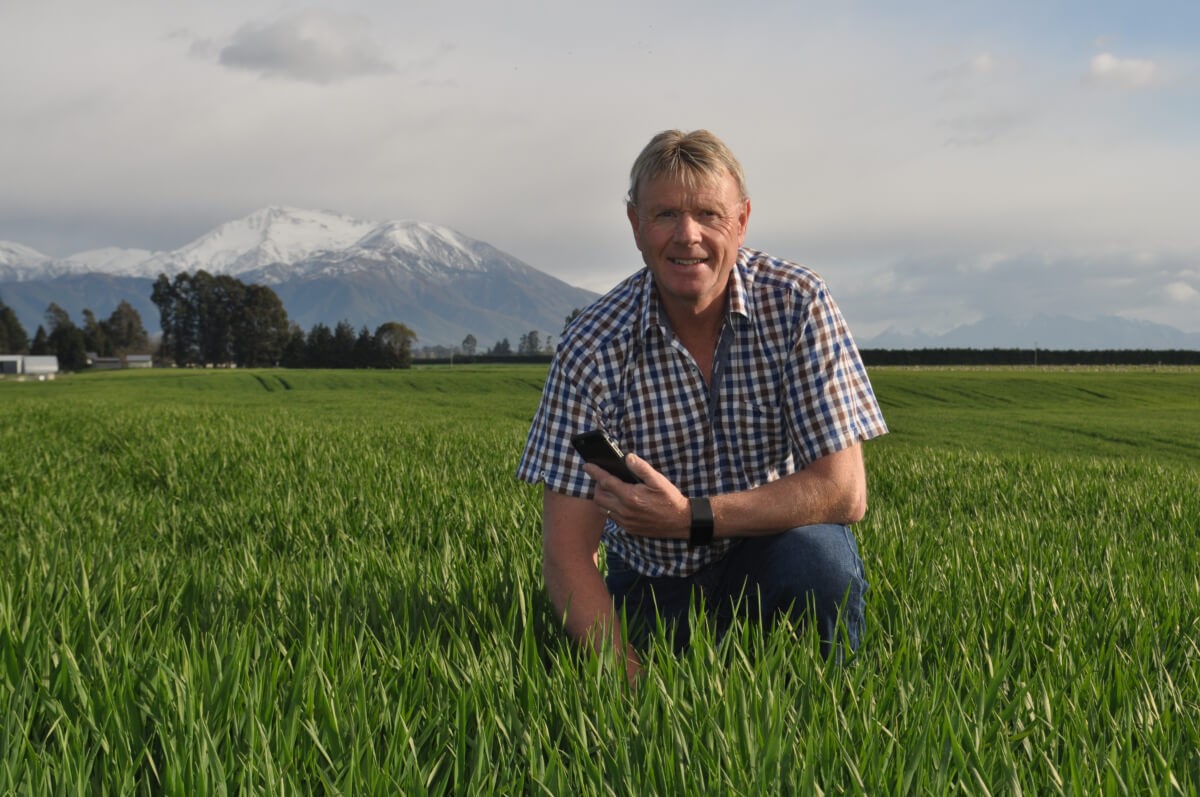 But as Craige explains, what really matters is mindset.

The foundations of a mindset.

Growing up, we knew the value of a dollar. They were hard to come by. We did the best we could with what we had. I was keen to get out and earn, so I finished school and went farming with my family. I learned early on that I enjoy pushing myself.

At 18 I travelled to the United States, instead of going to university. I saw the world for the first time, and it felt like we were all only limited by our imaginations. Coming home was a jolt back to reality. It was the 80’s and a tough period for farmers. If you have a hard time at any point in your career, the start is the place to have it. You learn how to survive early.

We took over the farm in 1984, buying it from my parents. We put in irrigation, expanded, and eventually removed all the stock from the system. We went into intensive seed production.

In 2006 we ventured into the dairy industry too, building up to 1240 cows at the peak. Then along came M. bovis. But it’s interesting, from adversity came opportunity. By having to cut the stocking rate down, we found our milk production per cow went up. We were on the efficiency journey, simply by doing the best we could in a tough situation.

Production is vanity. Profit is sanity.

In 2008 I did a Nuffield Scholarship, something I felt fortunate to receive. It meant travelling around the world for six months. My study topic was very broad, ‘Understanding the Carbon Footprint in Farming Systems.’ At the heart of it, I thought, if we cut inputs by 30% and still maintain outputs, we’ve reduced our carbon footprint by 30%, which in turn increased profitability.

While travelling I saw some intensive operations in Europe, broad acre framing at scale in the USA and Canada, through to small holder farms in China. It’s interesting to see what drives different decision-making and farming practises. Often these are influenced by subsidies and support mechanisms rather than efficiency, although I also saw some good examples of Precision Ag too.

Sometime after, I recall talking with Raj Khosla, the head of the International Precision Agriculture Association. He asked me to present at a conference, and I said “Ah Raj, we don’t really do precision.” He said, “…well you know exactly how many kilograms of fertiliser it takes to grow a tonne of wheat don’t you? You know what your inputs are. My friend, you are doing precision agriculture.”

From then on, I understood what we were doing. We started thinking, how do we go faster? How do we do better? All of a sudden, it became easy to decide to invest in more technology to enable these things. So, we looked at crop sensors, moisture probes, electromagnetic mapping of soils, all sorts of new technology. But again,

the biggest change wasn’t the technology, it was our mindset.

You circle back around to re-invest your profit into the technology that reduces inputs. Like machinery that places a bottlecap of fertiliser on every plant. Exactly the right amount at exactly the right time. That leads to better environmental outcomes as well.

After our daughter finished her degree at Lincoln, we asked her what she wanted to do. We saw there was an opportunity to help farmers work smarter, to make more informed decisions. That’s when Agri Optics NZ was born. We’re exclusive Trimble dealers for New Zealand now too, offering a range of products under the Vantage NZ brand.

At the heart of it all is GPS technology: GPS, flow control, steering, automation, and land levelling software. GPS is the enabler though. Without GPS you can’t really do any of the other clever things that result in precision outcomes.

Is it better to go rabbit shooting with a .22 or a shotgun?

I gave a presentation in Bonn at a climate change meeting. Somebody asked me, what’s the silver bullet that fixes things? And I said, it’s not a silver bullet, it’s a silver shotgun.

We need multiple tools in a biological food production system. We need lots of levers to pull. Yes, you’ve only got short range with your shotgun, but you’ve got a whole lot of cover.

There’s no one thing that does it all though. So you need to carefully integrate all your tools into the farming system, rather than the farmer into the tool system.

Is the regulatory environment moving more arable farmers into precision?

The higher the regulatory pressure, the more people will work to get ahead of the challenges those regulations create. We need to continue to have as many tools on the shelf as possible to meet them. As tough as it’s getting, we need to be out in front of it.

I’d rather be having conversations with government and regulators, trying to constructively slow things down to help make the best decision, and create the best outcome for everyone, including the environment. To build the time needed to think about a more considered approach. There’s no advantage in putting regulations in place that are unachievable. None.

We’ve had lots of regulators here over the years. It’s hard for them to push regulation when you’re already past where they think they want to go.

If we can show we’re not leaching anything through the profile in the growing season, like water from irrigation, then it’s very hard for them to say we’re putting nitrates into the groundwater. Especially when there’s nothing getting past the roots. Having the data to show this is powerful.

Unlike GMO, is CRISPR a tool you’ll get to use?

The first thing is, CRISPR is GMO. Rob Horsch was at the forefront of GMO technology. He worked for Monsanto for 20 years on Roundup Ready, which is where it all started.

I had an interesting conversation with Rob a couple of years ago at a crab restaurant somewhere on the East Coast of the US. He said what you’ve got to remember is CRISPR is only going to make small changes in GMO technology. For example, GMO changes a normal wheat plant into a glyphosate Roundup Ready plant. Or equally, it changes a plant to being insect resistant. These are large jumps. Whereas CRISPR only makes small tweaks.

CRISPR is a bit like a pair of molecular scissors. You make small edits by cutting strands of DNA. It has huge applications for treating and preventing disease, correcting genetic defects, and improving crops.

There are changes with CRISPR that will be useful to New Zealand agriculture. Like ryegrass that reduces methane emissions. CRISPR could be a way for GMO to come in to New Zealand, as incremental, more palatable changes for consumers.

Has precision has been a way to stay competitive without GMO?

There’s two things that drive that. One, we don’t live in a country complicated by subsidies. A lot of farming around the world is. We run a business. We’ve had to make sure we are profitable. Precision practices help make that happen.

Two, when you travel like I did with Nuffield, you see the challenges that face the farming system when you’re not careful. Herbicide-resistant weeds are one of the challenges countries with GMO have steaming down the track at them.

Precision agriculture still fits even if you do have GMO’s. Because it’s really about the right product, delivered the right way, at the right time. It doesn’t matter which area of the food production system you’re in either: horticultural, arable, sheep and beef, it can fit every sector.

Will the future of farming look like the start of Interstellar, with autonomous everything?

We used to be sheep, beef and cropping, now we’re 100% cropping. Some of the crops we grow today: spinach, pak-choy, carrots, radish, have mostly evolved in the last few years because food production systems have changed.

We’ve got dairy cows on the Canterbury Plains, driven by the fact that the Waikato was too expensive. With irrigation, Canterbury was seen to be the right place. We know that some of that will go back the other way. And yes, there’ll be more automation, because labour is likely to remain an issue for agriculture.

We’ve been developing bigger machines to maximise production. As autonomous technology advances, the machinery will get smaller, smarter, and run for longer. It will be about maximising profitability. A profitability mindset will be the only one worth having.

We’re all looking further ahead into the future now too. It’s like driving a car, you’ve got a large window to look out the front and a small rear vision mirror. Yes, we should know where we’ve been, but really, we’re more interested in seeing where we’re going and what challenges are coming at us.

Challenges like synthetic fertiliser and pesticide use. Like shifts in consumer food preferences. We’ve got climate change and some water challenges too. All those things are going to shape what we do. They will have a big impact on how we operate and what a farm of the future looks like.

That’s where technology and an understanding of how you use water for example, becomes increasingly important. Soil moisture probes helped cut our water use by over 35%. We wouldn’t have thought our current water footprint per kilogram produced was even possible ten years ago.

Learn from your successes and imagine the next ones.

In 2016 we were fortunate to receive the ‘International Precision Farmer of the Year’ award.

We worked hard for it, but some of our success came from the fact that we live in an environment where you can grow pretty much anything: high yield wheat, ryegrass, many crops.

We’ve got water. We’ve got access to fertiliser and technology. So compared to many places globally, we have a wealthy environment.

We have challenges, but we have many opportunities to be successful here too. I do believe we’re only limited by our imagination as to what we can do, and what we can achieve.

Connect with Craige on LinkedIn.