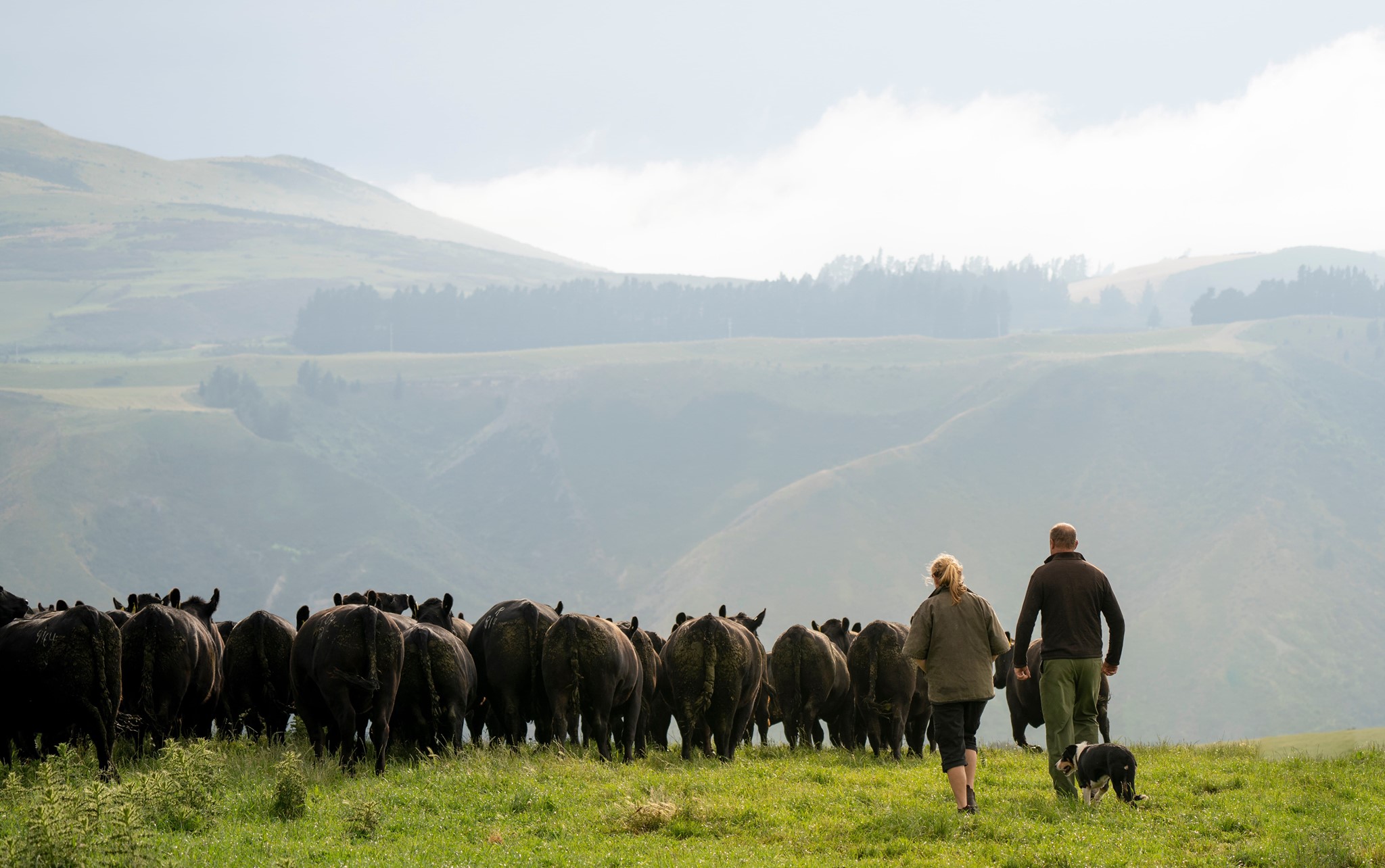 Ben Todhunter is a 2006 Nuffield Scholar and High Country Farmer. He farms Cleardale Station with his family in the Rakaia Gorge, Canterbury.

Below are the closing lines from Jim Morris’s poem ‘Rewards’. They capture the spirit of the high country farmer and as such are personal to Todd. Jim Morris was from neighbouring Manuka Point Station, and is now retired.

The ranges vast are here to stay
And he’s content to spend his day,
Working in their rugged grip
His recompense – the love of it.

This is a compilation of some of Ben’s LinkedIn posts from 2021.

A young calf got caught away from the main mob. Rather than applying pressure to the calf, Ben backs off, mum doubles back to bring the calf back to the mob herself.

Pressure and release. It’s a fundamental tenet of moving livestock. It also applies to humans as well. As a leader, working with tension or pressure to grow someone is a balance. How do you learn to get the judgement right?

Lesley Prior, Tellenby Merino Stud, Commented:
Great example of good stock handling. Quiet, patient and ‘going with the flow,’ but with gentle direction where necessary.

Ben observes that the rocks and stones scattered on his farm have ancient stories to tell.

Ben writes:
A collection of photos of some terminal and lateral moraine boulders. The greywacke rocks have fallen onto glacial ice and were carried up to 70km before being deposited in-situ approximately 18,000 years ago.

The greywacke was formed over a 200-million-year period as tens of thousands of metres of sediments built up off the edge of Gondwana. The sediments were eventually buried, deformed, hardened, and uplifted to become the rocks that formed the Southern Alps.

It’s useful therapy to ponder the stories of these rocks when considering your significance, or lack of, in the world.

Victoria Harvey, Climate change PHD researcher, commented:
A great reminder of our place and time in this world. Plus, very clean air judging by that lichen. 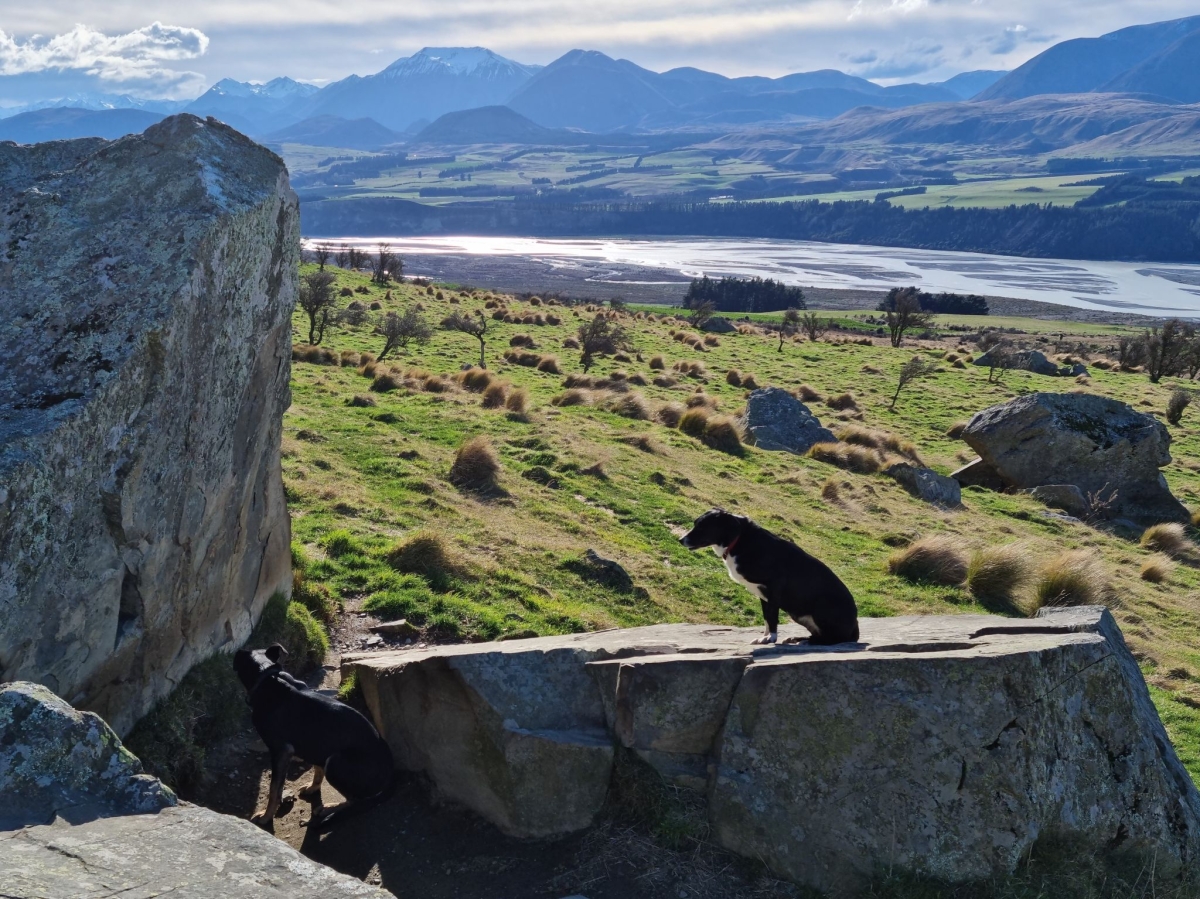 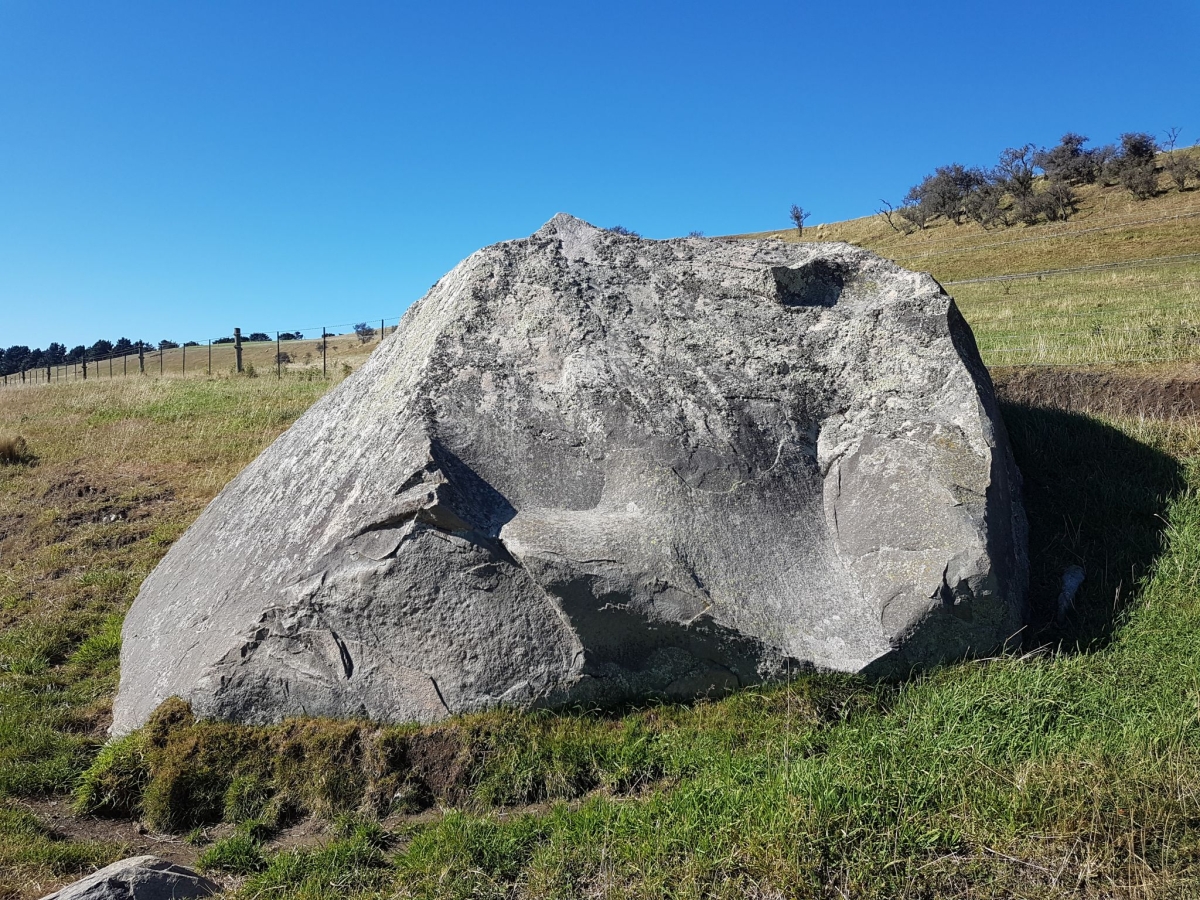 To reduce the time intensive process of matching dam with lamb, and at the same time increasing the quality of pedigree data, Ben introduced smart collars to Cleardale.

Ben writes:
Our current master shepherd (my father) is proving difficult to replicate and scale. These collars have Bluetooth technology and record proximity to other tags. If they are worn for 48 hours they provide an accurate record of the lambs and their mothers.

This is the same technology that can be used for some of the proposed contact tracing systems for disease management.

Helen Thoday, Solutions and Development at DairyNZ, commented:
That’s so much better than binoculars and spray-painted numbers. Ben observed an interesting play of light and perspective.

Ben writes:
Fascinating light on a frosty evening. They say the best time to show off livestock is in the afternoon light, but this may be taking it to extremes.

Gordon Ray, Lecturer at Grenoble Ecole de Management, commented:
On first impression, almost looks like a bubbly lava flow; when I noticed it’s sheep moving. I’ve worked with a large herd of sheep (1600) and the movement is so fluid as to almost look like slow motion water. Very cool video – thanks for sharing!

Curiosity or greed? A heifer gets caught in farm equipment looking for the lush grass beneath it. (the heifer was freed unharmed!)

Ben writes:
You know that time when you just go a little further than you should’ve?

Peter Stannack commented:
Boundaries are for testing. How else do you find out who you really are? 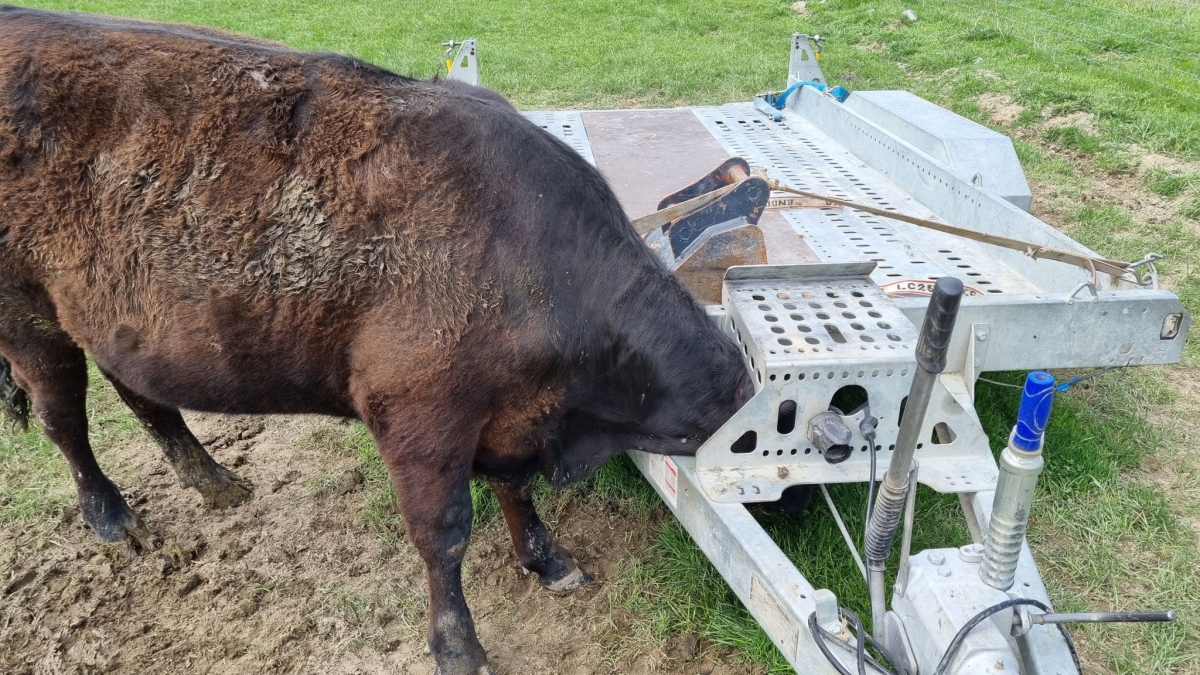 Concepts of mindfulness, wellbeing, and connection to nature are explored in this post.

This Awa or river, the Rakaia, is a big part of our lives and has many moods. Here it is flowing at 145 cumecs (cubic metres per second). The highest peak flow ever recorded was 5594 cumecs at midnight on January 9th, 1994.

We are involved with two groups protecting the special landscapes, flora, and fauna of The Rakaia from the gorge to the main divide. I’d like to extend that to the Coast as well. In a recent assessment the Rakaia scored the highest of all the braided Canterbury rivers to be proposed for World Heritage status.

The Whanganui River has been granted the status of a legal person. “I am the river; the river is me” affirms the deep connection of the Māori tribes of Whanganui to their ancestral river.

My connection to the Rakaia is not in that form. It is in the form of wonder, and respect, and love, and a place I can go to fill my soul. Where do you go to fill your soul?

Sam Martin, Exterior Architecture UK, commented:
Anywhere I can walk under trees works for me. Which is lucky given the situation here in London and our living so close to many commons and parks.

#7. A river runs through it

“You have my full attention.” Was Mac’s response to a text last year.

This is a story about the power of story. The story of a table with a story that tells a story.

We live beside the Rakaia River. Our Awa originates in the heart of the Southern Alps/Kā Tiritiri o te Moana from the Ramsey and Lyell Glaciers. It is a braided river coloured blue from the glacial flour at its origin. Occasionally Totara logs are carried down river from the mountains and are deposited in front of our farm.

Now Mac who was a neighbour and a top ad man, has now retired and become an accomplished luthier. He’d made me a stunning guitar from a previous piece of Totara and had expressed interest in working again with the special wood. So, when I found a suitable log, I sent a photo and immediately received the above reply.

Half an hour later he was on site thinking of possibilities. In his words “You are being trusted with an absolute gem of a tree, and you prepare it with the full respect and care that its mana demand. It was an absolute privilege to be asked to give this tree a new life.”

We then carved out a small bit suitable for guitars and kept the remainder. Maybe to build a table…

A few weeks later Mac asked if we’d like him to make a kitchen table for us.

Yes! Yes, was the response.

Mac enlisted the help of another neighbour and master wood whisperer Rob, to craft something special.

We had a few other pieces of wood from the replaced decking and guardrails of the historic Rakaia Gorge bridge and knowing the talents of these two we provided dimensions for our house and for my frame and left them to it.

Now for those who know about farm tables, a lot of business gets done around them, people are hosted, discussions are held and family times are lived around these tables. Being a storyteller Mac knew this and wondered if the table could tell a story? “Could it become a centre-piece, not just physically, but also emotionally and attitudinally? Could it have personality?”

And that is what we’ve got. Timber from the mountains, carried and battered by the river, inlaid with a representation of that braided river and held up by timbers from a bridge to the past, repurposed to create memories into the future for a family whose lives are intertwined with that Awa.

A special Taonga, which has a story, tells a story and will be part of many more stories. Thanks so much gents. 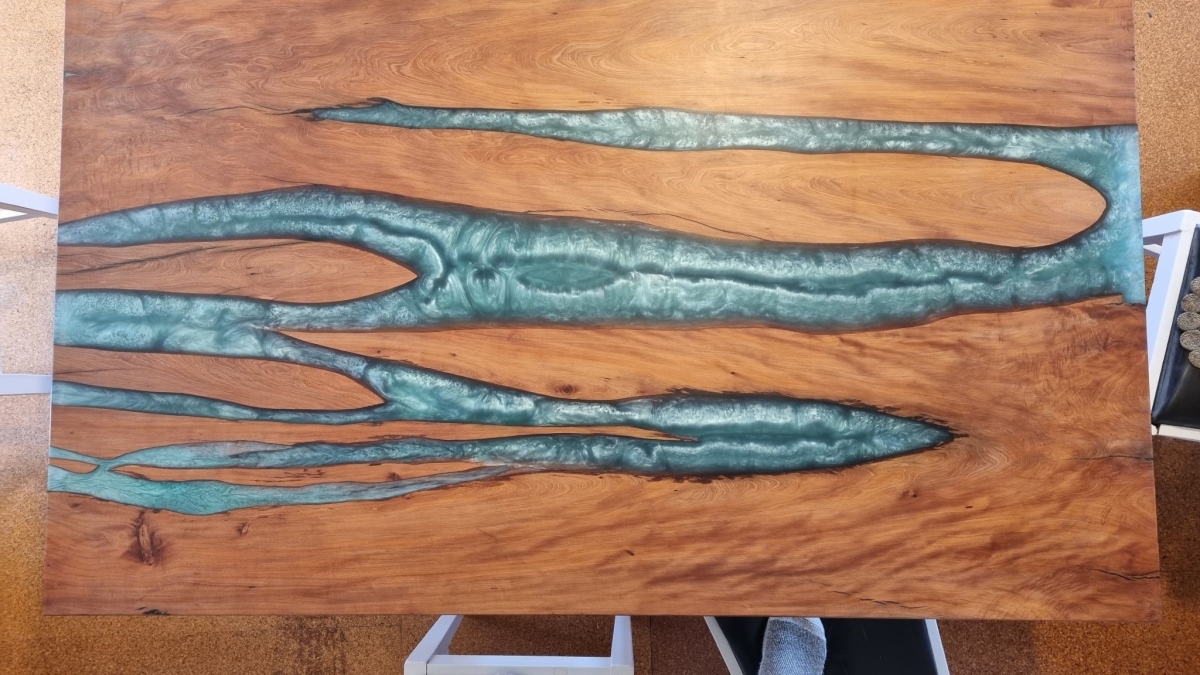 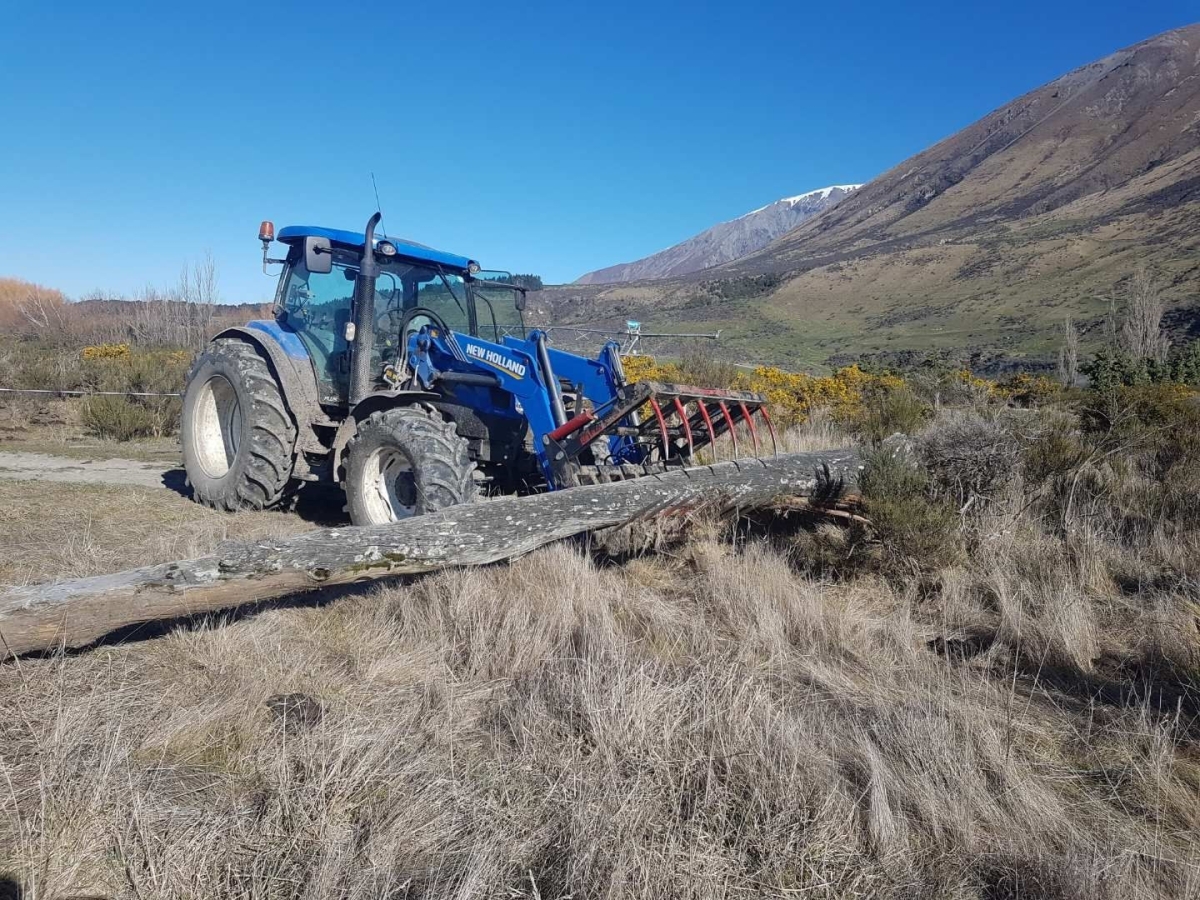 Partha Ghosal, Clean Energy, commented:
“You had my full attention.” So much so I read it twice! Never knew of Totara, let alone that it could make a stunning guitar/table. Something to do with your storytelling flair and a Luthier giving full respect maybe? Just love what you, he, and your wood whisperer achieved in the end. Your special Taonga.