The Trustees have over the last few months been working through a process to appoint a permanent Director of the New Zealand Nuffield Farming Scholarship Trust. Many of you may ask why this is necessary.

We have identified that to ensure the long term viability of the scholarship within New Zealand we needed to improve our performance with our existing sponsors and create an environment that actively encourages new investment by potential sponsors. To be able to enhance and develop new and existing funding relationships was the key skill set we were looking for in the appointment process for the position of Director.

We were delighted with the response and quality of the applicants who applied. From this strong field we would like to announce that we have engaged Richard Green of Ashburton to fill this role. Richard is in his early 40’s, married to Vicky with three children. He has a strong background and experience in agriculture and business and a passion for rural leadership.  A brief outline of his working career is as follows:

We are sure all scholars will join with us in welcoming Richard to the Nuffield fold. He attended the Wellington section of the Contemporary Scholars Conference to meet his international colleagues and contemporaries.

He is due to start in this part time contract position officially in early April. Please, if you should happen to meet him make yourself known.

This appointment is a major development for the NZ Nuffield Scholarship program and we are confident that Richard will bring his range of skills to enhance the way we operate. Barbie Barton will continue in her role with the secretariat work for New Zealand Nuffield allowing Richard to fully concentrate on the relationships needed to add real value to our sponsors.

2012 Nuffield Scholarships to research strong wools, farmer capability development and arable farmingThree Nuffield Scholarships have been announced for 2012.  Nuffield Scholarships assist individuals with vision and energy, who wish to make a difference to farming, food and rural communities.  The 2012 New Zealand Nuffield Farming Scholars are:
Sandra Faulkner (Gisborne)
Sandra and her husband Robert, have a very mixed property comprising sheep and beef, 350 hectares of arable corps and a citrus orchard. Sandra is the Chair of Gisborne TB Free and has been a chairperson of Federated Farmers Gisborne/Wairoa Meat and Fibre.
Sandra’s research topic will be around the strong wool industry, with her looking to extend the Kelloggs project she is currently working on.
Richard Fitzgerald (Methven)
Richard is the Chief Executive Officer of New Zealand Young Farmers and with his wife Ruth, farms 253 hectares of intensive mixed cropping in Methven.  He started working for New Zealand Young Farmers full time in 2002, initially as the Contest Manager for the National Bank Young Farmers Contest and has been its Chief Executive Officer since 2007.
Richard’s research topic will be on the capability development of farmers through farmer networks.
Michael Tayler (Temuka)
Michael farms 800 hectares over three properties in a family partnership with his brother, Nick Tayler. Their intensive arable business grows cereals, small seeds, carrots for juicing and potatoes. They also farm a sheep and beef and cattle unit.
Michael’s research topic will look at arable rotations and the sustainability of current practices.
For more information:
Sandra Faulkner, 021 529 041, 06 862 8655, randsfaulkner@xtra.co.nz
Richard Fitzgerald, 027 241 6353, 03 302 1804, richard.fitzgerald@youngfarmers.co.nz
Michael Tayler, 027 222 4777, 03 615 8771, michaeltayler@xtra.co.nz
Stuart Wright, New Zealand Nuffield Farming Scholarship Trust Chairman, 021 329 763, 03 318 3897 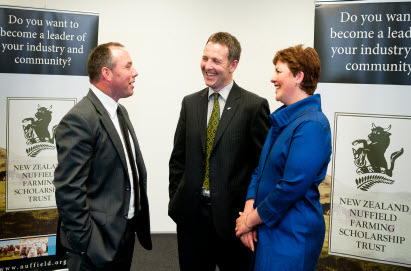 February 2012 and published in Farmer’s Weekly’s Pulpit SectionNew Zealand agriculture must embrace long term relationships with Asian customers, in particular China, says 2011 Nuffield Scholar David Campbell.  The Synlait employee has just completed his Nuffield Scholarship study report detailing two Asian markets, China and India, and outlining key market advantages, challenges for more profitable and sustainable markets.
It troubles me that so many of us have such a narrow view on China given they are our number one market for the next century.
In the last decade New Zealand agricultural exports to Asia have increased 71% to NZ$6 billion with China now the largest of these Asian markets. Growth is set to continue as the Asian economies continue to outpace those of the US or Europe.
An increasing proportion of Asia’s large population will develop internationally competitive purchasing power and consumers will be more able to afford the safe, high quality and innovative foods that NZ agriculture is capable of producing.
I spent March through August 2011 overseas as part of his Nuffield Scholarship. Being so far away from normal life and work for Synlait was a great part of the challenge and the experience.
First on the schedule was a global focus tour with a group of Australian Nuffield scholars. We basically went around the world – Brazil, Mexico, the US, Canada, Scotland – looking at all aspects of agriculture. We looked at farms and farm systems, visited processors, research institutions, wholesalers, retailers, trade officials and government departments – even the US Congress. An important part of the whole Nuffield experience is to give a well-<wbr></wbr>rounded look at agriculture globally.”
I met up with my wife Sue in Italy before heading off on my own three month study tour of India, China and Japan to form the basis of the report.
China can be described as New Zealand agriculture’s number one market for the next century due to its on-<wbr></wbr>going economic strength, population dynamics and Government policy direction. The New Zealand/China Free Trade Agreement (FTA) and our reputation for high standards of food safety represent key market advantages for us.
But New Zealand also faces challenges in understanding and engaging with Chinese customers, including language and cultural barriers, low purchasing power parity, New Zealand’s lack of capital and scale and Chinese Government processes.
The release of my report appears timely given the recent interest and comment on the Chinese purchase of the Crafar farms. While I don’t want to specifically enter the debate I believe the OIO made the right decision, and that it appears that Landcorp is doing a good job of engaging with the Chinese buyer for a win-<wbr></wbr>win outcome.
My four key solutions for China are; get closer to the customer, build relationships, extend the value chain with a ‘One World’ approach, and get clear on strategy so we focus our attentions on what the customer wants and how we can add value for them. China is setting up long term strategic partnerships and supply chains around the globe. They’re demonstrating they want to engage with the world. NZ has natural advantages and a great reputation in agriculture so it makes sense for China to look for agricultural investments and relationships here.
One of New Zealand agriculture’s key advantages over its competitors at the moment is the country’s status as the first OECD nation to sign a free trade agreement with China. But we’re missing out on some of the benefits that the FTA has created because of an apparent fear of Chinese investment. We’re really short of capital, and China has lots to invest. So we have to marry the two together – take the capital and the pathway to market, concentrate on what we do really well or where we have unique advantages, and commit to mutually-<wbr></wbr>beneficial relationships. If we’re too narrow-<wbr></wbr>minded in our view on China, they will look elsewhere and we will miss out forever.
If people take the time to visit China they will see there’s a significant amount of pollution, large tracts of land in China are desert and there is huge pressure on natural resources to sustain their population. They just don’t have the agricultural production they need to feed themselves. And they often don’t trust the safety of the food that they do produce. This provides a great opportunity for New Zealand agriculture to capitalise on.
India represents a significant potential market for NZ agriculture worthy of development and investment; however it is currently a much smaller market than China.  One of the advantages for New Zealand agriculture is an existing “brand NZ” presence through international cricket, while market challenges include significant agricultural tariffs, diverse culture and taste preferences, low beef consumption, lack of significant cold chain and modern retail infrastructure and bureaucracy. For India, I believe, one solution would be to encourage the signing of a NZ/India bilateral FTA.
*David Campbell will be presenting his report to the Allflex Platinum Primary Producers Conference in March, as well as the Nuffield Conference in April and is happy to discuss his findings with others in the industry interested in greater engagement with Asia.
The report can be downloaded from www.nuffield.org.nz.
For more information please contact David Campbell on 03 373 3052 (work), 021 0239 7306 or email David.Campbell@synlait.com or Barbie Barton, NZ Nuffield Scholarship Trust, 06 304 9495.

2012 Nuffield NZ scholars at New Zealand House’s Penthouse in London, whilst attending the 2012 Contemporary Scholars conference.The conference draws other Nuffield scholars from around the globe.  Together they get the opportunity to not only network, but discuss pressing issues facing global food production.
The Contemporary Scholars conference also sees participation by global business and political figures.  The 2013 Conference will take place in Ontario, Canada.